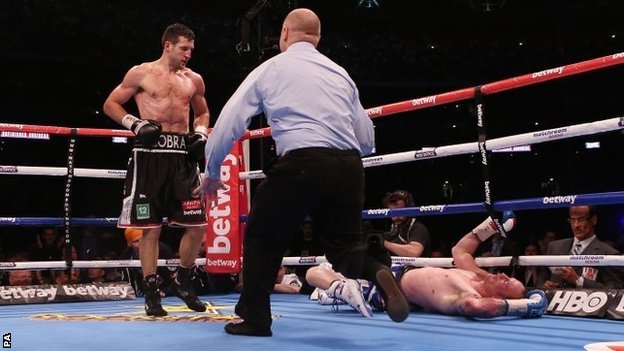 Carl Froch knocked George Groves out with a huge right hand in the eighth round of their rematch, in front of a British-record 80,000 fans at Wembley Stadium late saturday, 31 May, 2014.

In doing so, Nottingham’s Froch retained his IBF and WBA super-middleweight titles and erased the controversy of their first encounter.

Froch, 36, won in Manchester last November via a controversial ninth-round stoppage – but there was no room for debate this time.

Having built a lead in an often cagey fight, Froch floored the challenger towards the end of the eighth, rendering Groves unconscious.

Referee Charlie Fitch started his count but soon called it off. And while Groves initially protested, there were no further complaints. Two judges had Froch ahead at the time of the stoppage, one Groves.